npm all the things!

Are you one of those mugs ☕️ still downloading zip files of libraries for their JavaScript projects? Well you don’t have to be! Leverage the power of the command line today and npm that thing!

npm is Node’s Package Manager (how did they come up with that name??) and I am having great fun with it at the moment - packaging, modularising and managing my JavaScript project dependencies with minimal pain.

npm init in your project’s root and set up your package.json. (You can use the default answers if you want! I don’t care!) Now just start npm-install-ing the libraries you need for your app.

Using Backbone? Alright then, just do

So now you’ve got a new folder called node_modules and a subdirectory called backbone, where a bunch of Backbone.js related code lives. This means that all you need to do to use it is point your script tag to this directory, e.g. <script src="../node_modules/backbone/backbone.js"></script>. And if you’re running a node application all you need to do is stick require("backbone") in you .js files. Look how quick and easy that was!

That -S flag means that as well as installing the module, you’re also putting a reference to it in your package.json file under the dependencies property. This means that you, or anyone else can set up the project easily and install all its required dependencies just by running npm install in the same directory as the package.json - trust me, your future-self will thank you for it.

That was so fun, let’s do another one. How about writing some tests with Mocha and Chai?

There’s now another subdirectory alongside backbone in node_modules containing all the mocha code. Again, call it using a script tag, for example in your test runner file, or using the require() keyword for a node app.

The -D flag means save it in the package.json file, but this time in the devDependencies property, which, as you can guess is where we specify modules that we only need for development.

I’m getting tired now, let’s save some keystrokes on this one:

Boom! i is just an alias for install. Look at you, you poweruser! 😌 😁

But there’s always an exception. Say you’ve got a module like sinon which is split into separate modules in separate files and all loaded into the main sinon.js file using requires: you won’t be able to use this within a plain old script tag as the requires won’t work (no node!). Instead you want to reference single concatenated and/or minified files. This means you might have to download a library from the Internet like in the olden days. 📠

But npm is still great!

Is there any code that you could make into a package for easy reuse? Never written a node module before? This is hands down the best tutorial there is.

So with that in mind …

Go forth and npm all the things 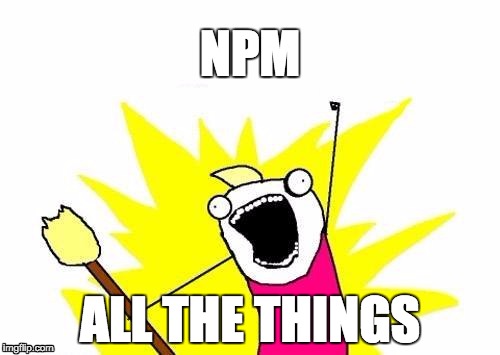